History shows that rather than giving into fear, staying invested and buying stocks during volatile times can be beneficial in the long run.

Many of us invest in stocks for their ability to grow our wealth. So when volatility rears its ugly head, our instinct is to take our money out of the market to safeguard it. However, history shows that rather than giving in to fear, staying invested and buying stocks during volatile times can be beneficial in the long run.

That analysis comes from examining the Cboe VIX,1 an index that measures volatility. It’s often referred to as the “fear index” because it gauges the market’s expectation of 30-day volatility. On average, the VIX measures around 20. But market events can quickly jolt it higher.

For example, in late February 2020, the initial US outbreak of the coronavirus pandemic pushed stocks down into bear market territory in record time. In March of 2020, continued fear sent the VIX soaring to a new record, surpassing the previous high set during the Global Financial Crisis.

Volatility is, by definition, a rapid and unpredictable change. And when that change is downward, it’s not an enjoyable experience. But there’s something to be said about staying the course despite the discomfort.

And if we step back and examine previous VIX spikes above 40 that indicated extremely high fear levels, there’s a trend. Within three years of volatility-induced declines, the market not only recovered its losses, but also produced additional positive returns in each case. Five years later, those gains continued, too.

A takeaway, then, is that while volatility can be difficult to endure, it can present opportunities for long-term investors. When the broad sentiment is fear and others are selling, it may be time to be contrarian: consider it an opportunity to not only stay invested, but to buy while prices are depressed.

Assumes reinvestment of capital gains and dividends and no taxes. Past performance does not guarantee future results. Indices are unmanaged and not available for direct investment. * This column shows the S&P 500 Index’s one-day loss on the date shown in column 1. Data Sources: Hartford Funds, Morningstar, and Factset, 2/21

The Benefits of Staying the Course

Another advantage to resisting fear is that it’s impossible to tell when the market will resume its upward course after a bout of volatility. So remaining invested during a market dip means participating in the recovery as soon as it happens, rather than waiting until things seem to be back on track and missing the beginning of the turnaround.

In a stark example of that advantage, take the Global Financial Crisis, arguably the most challenging market environment in our collective memory. As the chart and table above show, volatility picked up significantly in September 2008. This was followed by a record amount of outflows.

But investors who moved into cash missed out on the market’s recovery. Even if they did buy stocks again eventually, after the worst was over, that delay dampened their return potential. Ten years later, investors who sold when the market declined only saw a 157% increase from their pre-crisis account balances.

In short, although difficult, staying the course for the long term meant a better return than giving in to fear.

Now, we realize it’s easy to say volatility and market dips work themselves out in time, but we also know it’s much harder to experience in reality. It can be incredibly difficult to watch a hard-earned portfolio lose value, no matter how much of a buying opportunity it presents. And in today’s world of instant gratification, it can be difficult to keep in mind you’re more likely to recoup those losses over time, not immediately.

That’s why it’s critical to be proactive by working with a financial professional to build a portfolio that’s allocated according to your personal risk tolerances. This can help you stay confident no matter the market’s movements. And when you’re confident, you can be the contrarian who sees the opportunity in fear.

A financial professional can help you build a diversified portfolio so you can be confident during periods of volatility. 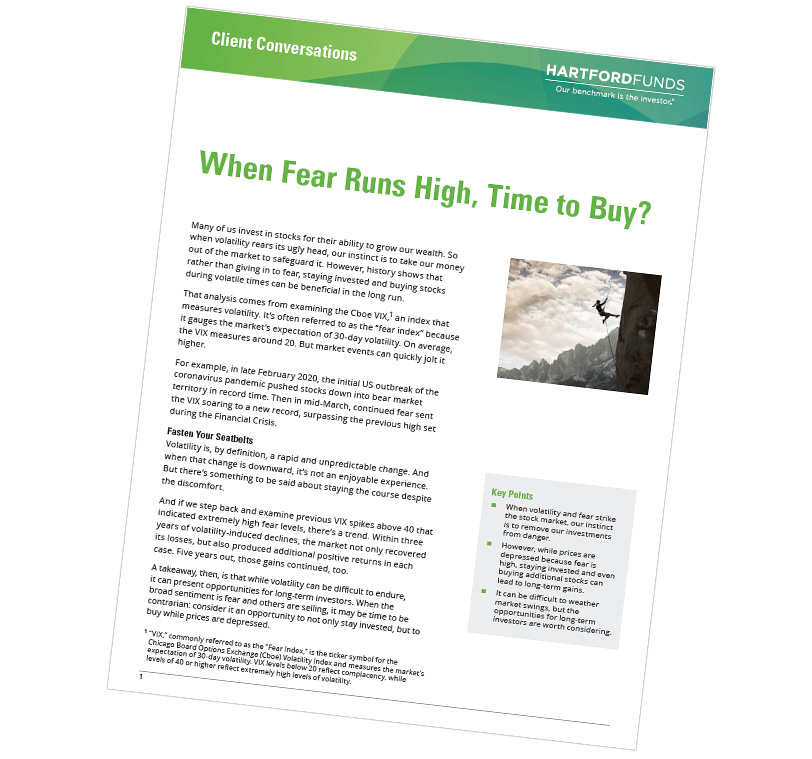 1 “VIX,” commonly referred to as the “Fear Index,” is the ticker symbol for the Chicago Board Options Exchange (Cboe) Volatility Index and measures the market’s expectation of 30-day volatility. VIX levels below 20 reflect complacency, while levels of 40 or higher reflect extremely high levels of volatility.

Dow Jones Industrial Average is an unmanaged, price-weighted index of 30 of the largest, most widely held stocks traded on the NYSE.

Investing involves risk, including the possible loss of principal. Diversification does not ensure a profit or protect against a loss in a declining market.

This information should not be considered investment advice or a recommendation to buy/sell any security.  In addition, it does not take into account the specific investment objectives, tax and financial condition of any specific person. This information has been prepared from sources believed reliable but the accuracy and completeness of the information cannot be guaranteed. This material and/or its contents are current at the time of writing and are subject to change without notice.